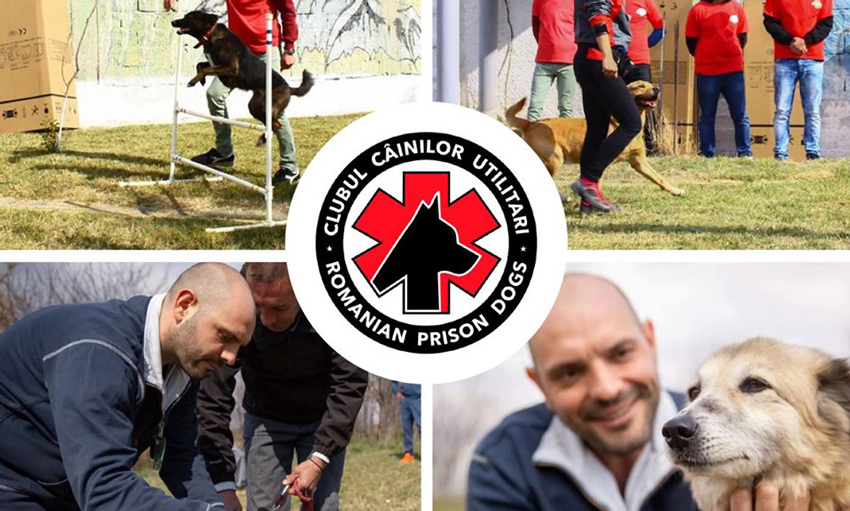 A multidisciplinary approach to animal welfare and inmate rehabilitation

The idea of rehabilitating inmates through human-animal interaction programs is not new; but given the situation in Romanian penitentiaries and animal welfare in Romania, this kind of project was almost unthinkable in the spring of 2016 when it all started. Though there had been some attempts before, things could simply not get off the ground. The breakthrough came with the initiation of a collaboration between Pet Stuff Universe Veterinary Hospital (PSU), The State Penitentiary Bucharest Jilava (PBJ), two non-governmental organizations (NGOs), The Utility Dogs Club (Clubul Cainilor Utilitari, CCU) and Big Heart Society (BHS).

The idea was to catch and sterilize the stray dogs in and around the penitentiary; house them in the old paddocks of the guardian dogs (used before EU entry); try to train them for adoption with the help of some inmates and finally, put them out for adoption.

The initiator was Ms Cristina Teoroc, the Educational Director from Jilava, who is an animal lover and had adopted a lot of animals. Together with Vlad Popescu, from CCU, Cristian Cristea and Ruxandra Tenia from Pet Stuff and Carla Buleanu from BHS, we formed a team that oversees the whole project.

The dogs come from the free roaming population (inside the penitentiary yard, the surrounding fields and the streets) via BHS, or were spotted by the penitentiary staff. The veterinarians would take care of the medical screening, sterilization and medical supervision of the dogs throughout the program; the dog trainers teach the inmates to work with the dogs towards the goal of socializing them enough so they can be adopted. BHS puts them out for adoption, making sure they find good homes and gathers the necessary donations. Inmates are selected every 3 months and move onto this program in teams of ten at a time. This allows PBJ to open the program to more inmates.  The inmates’ participation is supervised and coordinated by the penitentiary psychologists, educators and other personnel, and they are involved in almost all processes which concern the dogs. They help with the capturing of the dogs, especially inside the penitentiary walls, they feed, groom and clean the dog kennels, train the dogs for socialization and assist the vets with simple medical procedures.

Typically, vets and dog trainers visit the penitentiary once a week if no medical emergency occurs. Serious medical conditions may require bringing some of the dogs to the veterinary hospital in town. Every week we work with the inmates to establish dog training and medical protocols that inmates implement throughout the week under the supervision of penitentiary staff (psychologists and educators). The BHS ensures we have plenty of videos and photos to share on social media to help with the dog’s adoption.

Initially, the paddocks were populated by descendants of the old guardian dogs, all 12 of them. A distemper breakout almost decimated the population, and the survivors were saved through the great effort of the Pet Stuff vets. They were taken to the hospital and from there they were taken for adoption in various places. In the meantime, the dog trainers started a routine in which inmates were integrated into the training of CCU’s search and rescue of the dogs.

In this way, vets, dog trainers, inmates and penitentiary personnel started to learn each other’s ways, so the rest of the collaboration runs smoothly.

The next stage was tackling the penitentiary stray dog problem. At the time, complaints would come in from people about how these dogs were biting personnel, inmates and visitors in and around the prison. The procedure was to call on the authorities to capture and euthanise the dogs. Instead, the program initiated a campaign; people from the vet hospital, dog trainers and even penitentiary personnel and inmates started catching these dogs in order to save their lives. There were 5 or 6 organized “rounding-up” sessions.

Between April and September 2017, 65 adult dogs and 20 puppies were captured, sterilized and sent for adoption, when their behavior and state of health allowed it. The vets took care of those that had medical conditions (some with very severe problems) and made sure everyone survived. The dogs with inappropriate social behaviors, were housed in the newly emptied paddocks and the first team of ten inmates was selected in order to start working with them. A couple of inmates were selected to work permanently at the kennels and this permanent job remains as the maximum reward for the inmates.

In that same campaign 12 cats were brought into the vet hospital, treated and sterilized, with some sent for adoption and others, integrated into the lives of the inmates, by keeping them in one of the dormitories, an in-prison therapeutic community for former drug users. Their presence allows inmates to learn responsible behaviors towards animals.

Right now, in the paddocks we have 33 adult dogs and 6 three-month-old puppies. Inmates take care of them, under the supervision of penitentiary psychologists who establish educational goals for the involved inmates. Every week, dog trainers, vets and even a camera person come to visit and establish dog training protocols with the inmates, decide the medical treatment needed for some animals and the goals the inmates need to achieve with regards to their own rehabilitation.

Since the beginning of the program we have sent 35 dogs for adoption (in addition to the 33 we have housed at the moment), many recovering some from severe illness, and some born in the wild the before being “tamed” in this program. Three inmates have been hired in animal care jobs upon release. More than 70 inmates, have been directly or indirectly involved and helped by the program.

Starting in 2018, every 6 months, the program organizes an event, called “Adopt don’t shop” and we take part in Interfest, a penitentiary event.

Student vets or those just starting their career as vets, psychologists, educators and dog trainers are making informal internships in this program.

Program’s objective:
1) To develop inmates empathy toward other life forms and, consequently, towards peers

3) To develop the inmates’ responsibility towards dogs, the local community and society – pro-social mindset

Program’s activities
1) Capture and sterilize the dogs from inside and outside the penitentiary, vaccinate and deworm them and prepare them for adoption. Otherwise these dogs will be destined for euthanasia.

2) Refurbish/ build paddocks to shelter these dogs with the help of the inmates part of the program, in decent conditions until they will be able to leave for adoption or fosters.

4) Coach inmates to train the dogs under the guidance of a CCU trainer, a psychologist and a veterinarian.

We want to promote this program in and outside Romania, to make it better and possibly to inspire others in replicating it.